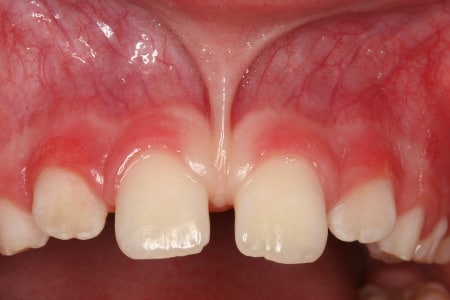 A frenum is defined as a fold of a mucous membrane connecting a movable part of the body to a fixed part and serving to limit the movement of the movable part.  A frenum is a muscular attachment between two tissues.

There are two frenum in the mouth that can sometimes obstruct normal function and are candidates for frenectomies. They are called the lingual frenum, which connects the tongue to the floor of the mouth, and the maxillary labial frenum, which connects the inside of your upper lip to your gums just above your upper two front teeth. These conditions are also called tongue tie and lip tie.

Ankyloglossia, or tongue-tie, is the restriction of tongue movement as a result of fusion or adherence of the tongue to the floor of the mouth.  A tongue-tie is therefore caused by a frenum that is abnormally short or attached too close to the tip of the tongue which can affects speech and eating habits and more.

A frenectomy is a minor surgical procedure where a dentist simply snips the frenulum in order to free-up the lips or tongue. In the past, it would normally be performed using surgical scissors and sutures, actually this procedure is easier by using a laser with no or small bleeding after this act.

A laser frenectomy generally heals quickly with little to no pain.

The benefits of a frenectomy are usually fairly immediate and positive. The procedure itself takes only a few minutes usually, and will cause discomfort for just a couple of days. The site will usually heal quickly. It’s important to keep the area clean