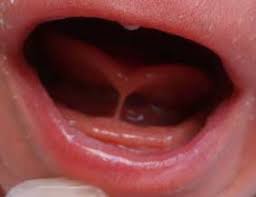 We speak about a tongue-tie (known by Ankyloglossia) when the string of tissue under your baby’s tongue (frenulum), which attaches the tongue to the floor of the mouth, is too short.

Many babies who have tongue-tie have no symptoms or problems at all, that’s why is not always easy to recognise it, and sometimes it’s not always possible to see it just by having a look. It may not be found until later, when you and your baby run into speech or feeding problems causing low weight gain and constant fussiness of the baby.

Research suggests that approximately 1 in 10 babies may be born with some membrane under the tongue. But only about half of those babies display significantly reduced tongue function, making breast or bottle feeding difficult.
Assessment for tongue-tie requires training and skill and involves placing a finger in the baby’s mouth. It cannot be done by just taking a look. Assessment is usually carried out with the baby on the assessor’s lap or a flat surface such as a table or couch. It involves observing how the baby uses their tongue. Professionals assessing babies for tongue-ties should assess elevation, lateralisation and extension.

If it is determined that tongue-tie is causing breastfeeding difficulties, there is a simple procedure called a “frenetomy” that can quickly correct the problem. The procedure is relatively painless and doesn’t require anaesthesia and stitches. The doctor simply clips the frenulum to loosen it and allow the tongue full range of motion. It takes less than a second, and because the frenulum contains almost no blood, there is usually only a drop or two of blood. The baby is put on the breast immediately following the procedure, and the bleeding stops almost instantly.

Frenectomies are not a treatment limited to children and can be carried out in later life on adults that are suffering impairment too.